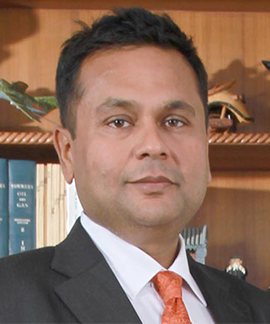 Hemant Sahai joined the Board of the Company as an Independent Director in August 2018. Hemant is the Chairman of the Stakeholder Relationship Committee.

Hemant is the Founding Partner of the law firm HSA Advocates and member of the International Bar Association.

Hemant has been recognised as one of the top 100 lawyers in India by leading international publications including - IBLJ and has also been awarded the “Infrastructure Lawyer of the Year” by a reputed international legal publication – “American Lawyer’s Emerging Markets Awards”, in Singapore. He has consistently been highly recommended as a leading lawyer by Asia Pacific Legal 500, Chambers Asia Pacific as well as Chambers Global, among many others.

Hemant has done his B Com (H) and LLB from Delhi University. He has served as adviser to several working groups and committees formed by top government bodies/institutions including certain extra ministerial policy advisory bodies constituted by the PMO, from time to time. He is an Independent Director on the boards of MB Power (Madhya Pradesh) Limited.